“Be still when you have nothing to say. When genuine passion moves you,
say what you’ve got to say. And say it hot.” -D.H. Lawrence 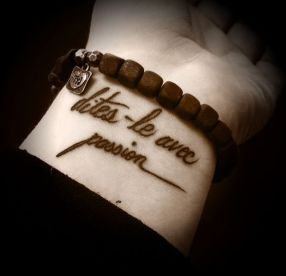 My left wrist features an inked homage to this quote. It’s a reminder that words are valuable, words are impactful, and when impassioned you must use your voice.

My call to adventure happened at the end of April.

One morning before work, I sat in bed and spent a few minutes crafting a Facebook post about my struggle with depression. My social media presence until that point had been fairly lighthearted, but I felt called to be raw and transparent with my struggle. Through years of journalism and creative writing classes, coupled with years of therapy, I’ve grown accustomed to “using my words” to share my most intimate stories.

My hope was that one person would read that post and say, “yes! Me too! I don’t feel so alone now!” What happened in the following days was an unplanned push into the world of blogging. A world I’ve stalked, admired, and talked myself out of for years.

A few hours after I shared my post, my old youth minister asked if he could share it on his website. Another friend from college asked the same. Over the weekend the post gained some traction, and I felt emboldened enough to pitch it to The Huffington Post and The Mighty. I heard back from both.

A “few seconds of insane courage” jump-started my foray into blogging, and you can find the post on the following sites:

Now the fun part begins! Being open to those encounters where I feel impassioned to share my voice … and then actually following through.

Thank you for supporting and joining me on this journey. It will no doubt be a ridiculous one.

All the best,
-LC